"Houston, it looks like we got us a Dragon by the tail"

Well that was amazing: I just watched the live video feed from NASA of the SpaceX Dragon capsule docking (well, being grabbed by a robot arm) with the International Space Station. This is a pretty important moment: it's the first time a privately funded mission has made it to space and linked up with NASA. 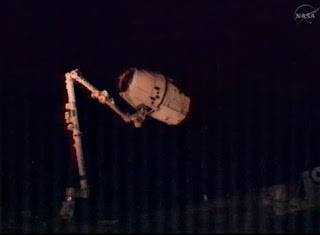 It was pretty impressive, to watch the robot arm being carefully guided to link up with the capture mechanism on the Dragon: that's a lot of complicated equipment being wielded in a place with very little margin for error, and watching the tense faces at Houston goes to show how hard it all is. But of course, that sort of thing has happened loads of times now, with the ISS having been in orbit for years, and numerous other complicated things (such as Hubble) being delicately positioned in orbit. 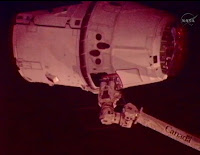 That isn't the point though: so far, every space mission has had the backing of very big, well funded (in comparison)  government agencies. The achievements of NASA et al. over the past decades have obviously been immense - humans on the moon, probes to the edge of the solar system, robots on other planets. These are right and proper things for publicly funded science to be doing - but if it takes a massive government-funded organisation to get anything into space, that's going to be a problem. It's not the kind of setup that will let humans really do space, or allow the kind of unlimited exploration and adventure that we'd all love to see.

NASA's budget, as we recently became only too aware, can only stretch so far, and making the hard choices between different missions is no fun. Now though, SpaceX has conclusively shown it is possible for a private company, in just a few years, to become capable of getting hardware into space, and interacting with the bigger players already there. Hopefully they and other private companies will soon be capable of dealing with the necessary commercial aspect of space - launching satellites, tourism, and so on - leaving publicly funded bodies to get on with the fun stuff. 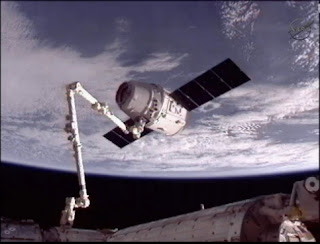 That's the practical, financial argument, anyway. But from a futuristic, sci-fi point of view, this achievement is the start of something very important. It's hard to imagine humanity becoming a proper space-faring race if only governments of wealthy nations can go there. And while the initial plan, or so I gather, is for private companies to step in handle the drudgery of supplying the ISS, maintaining satellites and so on, I don't doubt that once more companies get off the ground, so many more things will begin to happen. Who knows the possibilities that could open up, once space becomes easy for ordinary people (OK, not quite, but you get the idea) to reach, who are free to boldly go as they see fit, without having to justify every bit of spending to governments or taxpayers: this is "a new era for space flight unfolding in real time" as the NASA video commentator put it.

Of course, today's achievement didn't happen spontaneously, and it certainly wasn't cheap: it took many many years to get this done, and months of planning just for the docking; and I'm guessing the price tag (for the mission itself and years of development) and was pretty heavy. Running up and down to space on a whim is still a long way away. But the fact that a private company can get to space is the important point, and illustrates how far we have come in the last fifty years. It's often lamented that humans have not been back to the moon since the '70s - almost as if we lost interest - but in those days, it took a large part of the wealth of a world superpower to do it. This is clearly no longer the case - and it can only get easier from here.  The true age of space flight could soon begin. 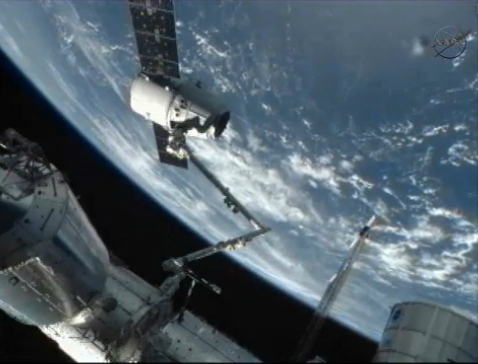 Images taken from the NASA video feed at http://www.nasa.gov/multimedia/nasatv/ustream.html
Posted by Osian at 15:56