Further joy at religious versions of reality being untrue


A month or two ago, I wrote about why I am so very glad that the versions of reality described by various religions are almost certainly untrue. I spoke about the tyrannical vision of life that Christianity, for example, teaches, and how I am glad to live in a world where this is almost definitely not the case.

But for all the suffering that humans might endure, on the larger scale of the universe, this is not really of much significance. What are the lives and deaths of a few score billion people, in the vast cold depths of the universe? But most religions not only have a position on what humans can and should do, the meaning of their lives, and the path to their ultimate destiny: they also have quite specific ideas about how the universe as a whole works. In a way, I think it would be an even greater shame if these were actually true, since not only would humanity by living under the yoke of an all seeing slave driver / condemned to karma-driven reincarnation / punished infinitely for finite crimes (and so on), but the universe itself would not be the wondrous thing we perceive it to be.

Take, for example, the Christian creation myth. That the planet was created in about a week, and populated immediately with all flora, fauna, and mankind in pretty much their current forms almost immediately, has a superficial appeal. As creation myths go, it isn't so bad, and implies a touch of artistry on the part of the God who created it all (after all, it took a whole six days' work). But on further consideration, I find this to be so, so, dull. The whole thing, as a working system, arrived in one go? What about the coalescing of a cosmic dust cloud, the ages of fiery volcanism, the majestic drift and shuddering collision of continents, the cycles of ice and fire, that made up the natural history of the Earth, as science tells it? That is what we stand to lose, if the Christian creation myth is true, and I would see that as a big let-down. Four billion years of geological chaos is so much more entertaining than a few days of divine construction.

And it's not just the Earth's marvellous history that we'd lose: remember, that particular creation myth - and all the others, for that matter - generally speak about the creation of the whole universe. The big bang, re-ionisation, hyper-inflation, the collision of multidimensional membranes, the birth and death of stars... all these wonders of science would turn out to be an illusion, placed into the cosmos such that they just happen to look as though they tell a rich and awe-inspiring history, for some reason. That may be an over-literal interpretation of these myths, but even so - if the universe did evolve as we suppose it did, but either under the direction of, or set in motion by, some God, a pantheon of gods born of chaos, supernatural force, divine congress, or whatever, that would still remove a lot of the fun from trying to figure it out, and the wonder at how it all came to be.

The question of our own origins is another matter in which the scientific truth far outweighs any religious claim in terms of wonder and inspiration. The evolutionary origin of humanity is something which still drags on as a point of contention amongst the more literalistic religious believers, as countless debates and school-board hearings sadly demonstrate. One of the prime motivations, it seems, behind those who would deny our descent from ape ancestors, is the unwillingness to associate humans with being mere animals, a disgust of what it says about our un-divine natures. I see it exactly the other way around: evolution by natural selection is a far more empowering way to have come into being than to be merely placed, fully formed, in a garden one sunny Saturday morning. If we are to believe we were created pure and perfect, then presumably we must be nothing other than a disappointment, ever declining and sinning and failing to achieve our god-given potential - certainly not a very inspiring view of life (that sadly seems prevalent in a lot of religious thinking). The alternative, that we started as apes eking a living by whatever means from a merciless environment, and gradually developed into the thinking, feeling, rational beings we are, able to achieve great feats of engineering and exploration, to extend our own lives to many times their natural length and live in comfort undreamed of by any other creature: that is surely the more pleasing interpretation of our existence, and one which I am very happy to find is much more likely to be true.

Lest it seem like I'm going after Christianity in particular (though as I said before, that's just because it's the one I know most about), I'll emphasise the point that it doesn't really matter which mythical view of reality one considers: none of them match the real physical universe for sheer awesomeness. No religious sect ever dreamed up anything as majestic as spirals of stars, hundreds of quadrillions of miles wide, spinning towards each other over uncountable billions of years, to eventually collide and pass though each other. No creation myth is as impressive as an exploding star, spewing heavy elements formed in the fires of nuclear fusion out into space, to gradually coalesce into balls of rock and gas capable of sustaining life. No fantastical account of human beginnings is as empowering and satisfying as a billion year struggle from single celled life, through countless different forms, pitted against all the relentless forces of nature and the jaws of predators, and against all the odds, to survive, to produce beings capable not just of rising themselves out of the dust but to actively transcend our own biology, and to be capable of comprehending the whole dizzying journey. 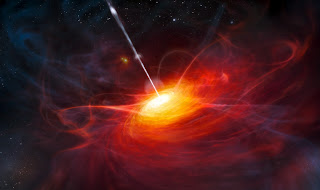 That's why I get somewhat annoyed at religious believers who ignore such majesty; who insist that as wondrous as it is, it was produced by one God for one purpose; or to deny it even happened: because what they are missing is amazing. Similarly, for any semi-spiritual, New-Age philosophy that insists there's 'something' out there, that there are are things 'beyond science' or facts we are 'not meant to know'... well yes, of course there's something out there: there's a whole universe of supermassive black holes and unimaginably small strings, of nebulae bigger than a thousand suns and wasps smaller than a pinhead. And isn't this enough - just this? Why invoke ghosts and spirits and gods and demons, when we have the mystery of consciousness, the ingenuity of evolution, and the search for life elsewhere to occupy us? It seems that any alternative fantasies that people invoke serve only to detract from the real nature of reality, and are a poor substitute for the wonders that are really there to be found.

That's why I'm happy with the real, physical universe we have, and why I see it not as some barren, bleak, godless void, but a playground of rich wonders of which we could never have imagined. And why, as we begin to comprehend how the whole thing works, I am immensely glad that it is not a six-thousand year old project of an omnipotent tyrant, a result of a snake eating itself, or produced by a melody over dark water: but thirteen billion years of chaos and confusion and matter and exploding stars and dinosaurs and pulsars and drifting continents and giant sloths and hot Jupiters and the Casimir effect and common descent and redshift and quantum entanglement and emergent consciousness. This is much more fun.