Reflections on the incomprehensibly large number of people that exist


I travel around on trains quite a lot. And one thing that always strikes me is the sheer number of houses I see as I flit by - in their hundreds, thousands, in every town and city. Not that there are an inappropriate number - I'm sure that there are approximately the right amount of houses for the people who need to live in them. But it's unsettling.

Because in every one of those houses, there will be people. This is not surprising, as there are several million people in the country, and they have to live somewhere. But the number of people is merely a statistic, as easily ignored as national debt or a famine death count; we are accustomed to hearing large numbers and used to ignoring them, of not seeing their true significance.

not actually taken from a train. obviously


The thing is, every one of those houses contains unique, individual people, each with their own lives, a full back story, an identity, hopes for the future. To glimpse briefly one house, its back garden open to the train tracks and strewn with children's toys, is to realise that it has real, live inhabitants, as real as myself or anyone I know. Theirs will be a house full of possessions, items of varying utility and consequence, the detritus that gathers around human life. I think of my house, filled with so many objects, each with its own meaning, a collection of memories accumulated over decades - this seems normal, it is right that my house should be so full of personal history... and yet, so will the house of this unknown, unseen family, and every other; rich histories that make up real people's lives, but totally unknown. This is difficult to grasp, the enormous quantity of stuff that exists out there, meaningful to some and unknown to the rest.

An instant later, the house is gone, disappearing into the distance as the train speeds on, to be replaced by more, similar yet still unique, innumerably many stretching beyond the horizon. It's strange to think I am not likely to look upon it again, to notice it amongst all the others; and that its inhabitants I will never meet, and know of them only by implication of the building they inhabit. A piece of momentary scenery, hiding whole existences utterly unknown, to me and almost everyone else, but lived out as fully and purposefully as any other.

That, I find, is what's difficult to fully comprehend. The physical amount of brick and steel that make up houses is itself vast, but quantifiable; the gargantuan amount of material that make up these millions of homes is all just so much inert matter. But for so, so many living, breathing, individual humans to inhabit them seems unbelievable, almost too far fetched to be true. Given the immense (and largely unremembered) detail that makes up my own life, can it really be possible that such complexity is replicated millions, billions, of times? 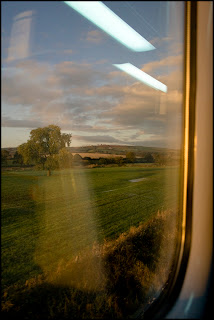 This is why it's so hard to understand the meaning of large numbers of people. Thousands die every day from preventable causes, but a nation's heart is captured by stories of individuals, personal narratives to which we can easily relate; an incongruity that makes tackling humanity's larger problems so difficult.  The world's population has reached seven billion - but what is that, other than just a billion more than it was last time we checked? To try and think of them all as people is impossible - not only because we can't really visualise what a one and nine noughts actually represents, but because it just seems so much beyond imagining, that this many individual lives can actually be happening, right here, right now, as real and detailed as our own. If truly contemplating the existence of all the people implied by my view from the train is daunting, to remember that this is a tiny, insignificant fraction of the humanity that's out there is dizzying indeed. I might just look away from the window for a while.